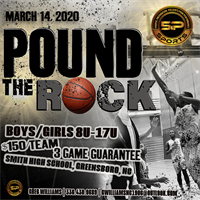 5P SPORTS would like to take this opportunity to welcome you! Here is some information that will help make your trip more enjoyable.

The National High School Federation Rules and Regulations (NHSF) will apply to all games with the following exceptions.

All event related questions should be directed to Greg Williams at gwilliamsnc1906@outlook.com or call 336-430-9689.

YOUTH BASKETBALL EVENT, TOURNAMENT AND LEAGUE DIRECTORY Market your event by submitting it to our directory. Submit Event