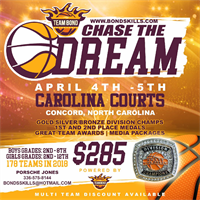 v  COACHES/PLAYERS, PLEASE USE TIME AT THE END OF EACH GAME TO CLEAN BENCH AREA

v  Home Team is listed first, will wear white or their light-colored uniform

CODE OF CONDUCT: Any Player that is ejected or removed from a game will be suspended for the rest of the Tournament.

Game Clock Playing Times:  Please Note: Rules Can Be Over Ruled By Site Director. PLEASE TRAVEL WITH REPORT CARDS!!!! *ALL GRADES ARE BASED ON CURRENT 2018-2019 SCHOOL YEAR AS OF SEPT. 1ST, 2018*

Overtime will be 1 minute – Max of 1 OT, Then Sudden Death First Team Score.

Running clock time will be used if the score is 20 points; it will return to a stopped clock if the score goes under 15 points. Any Team Who Is Leading Can Not Press During Running Clock.

Pool Play ties will be determined by the following:

**NOTE – Some divisions may not have pool play / bracket play**

Players must compete in their own grade classification, with the exception that players in a lower grade may participate in an older division (in the same organization). A player may only play on a team when they are placed on the roster. At the discretion of the tournament director, some age brackets may be combined based on team registrations or level of play.

Technical Fouls
Each coach or player will be allowed two technical fouls per game. After a second technical foul, players/coach will be ejected from game (cannot be in gym). After first technical foul, the coach must remain seated for the duration of the game. (Sit out Rule will be based on the Officials).

All other North Carolina High School Athletic Association Rules will be used.

All protest of opposing team must be done prior to the start of the scheduled game, the tournament will charge a protest fee of $80 to acquire all documents. No protest of a team will be allowed after a game has been played

All monies, including discounts, must be PAID BEFORE the Tournament in order to get the Team Discount

**BOND EVENTS is not financially responsible for forfeits, lost or stolen items**

YOUTH BASKETBALL EVENT, TOURNAMENT AND LEAGUE DIRECTORY Market your event by submitting it to our directory. Submit Event